Advertisement ideas can be so subtle that you do not even notice it.

Advertisement ideas have fueled heated discussions both large and small from Pubs to Boardrooms around your town and all around the world.

Advertisement Ideas are everywhere. Look all around you and when you stop and really take a look you will notice that someone or something is always in your view vying for your attention each one using their particular brand of advertisement to elicit hopefully a knee jerk reaction from you.

You are subconsciously subdued, under its magical spell, (ether) taken away on a sensual journey on a magic carpet ride to wonderland the land of emotional bliss. Before you realize it you have a desire for something, and you may not even understand why.

You see people buy because of feelings those intangible emotions, and not by logic, reasoning as you would like to think. 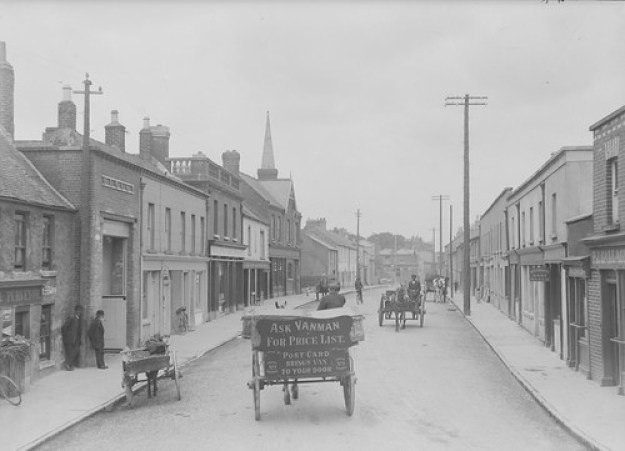 Advertisement on back of horse drawn buggy.

Facts tell and stories sell. Since the beginning of time when one generation was trying to get a message across to the next generation they used story telling. The elder didn’t say “don’t wander in the woods or forest alone”. Oh no he, or she told a story of how someone left the fold and went on a long and scary journey, and all the terrible things that happened along the way, so that the message was sent emotionally not to wander off, or you could end up like the victim in the story. You would remember the story and pass it on because you could feel that story. Well this idea is behind all good and great advertising and marketing.

How do you react when someone tells you that you need to do something, even if it makes sense it probably won’t move you enough to act.

We are sold on benefits for us, not features of whatever someone is trying to sell. For example your mother might say “brush your teeth, and comb your hair you need to be nice for school”, well that won’t move you half as much as “you know Suzie is coming over tonight” The emotions felt about seeing Suzie is going to move a young man much more than “you need to be nice for school”.

Knowing that emotions, feelings, and not logic, reasoning moves people to act and react tells you that you can use the study of how people act and react called psychology in your advertising ideas to get their attention and elicit a reaction and hopefully market your wares.

It is best to run a business to serve your clients.

Now in all fairness we don’t want to just take advantage of people so make sure what you offer is something your buyer wants, and is worth every penny they would pay for it. Be there for your client really there listening, acknowledging, and serving. Treat people the way you would like to be treated with respect, and honor. People know you are in business to make a profit.

Now the best advertisement ideas are the ones that come from the heart where people know you care, so think about how you can help people feel better with what you offer, then share it with them through a story.